Let's get this right. The only thing the word “miniature” has to do with an animal's description is its size - more specifically its height. In no language in the world is “miniature” defined by pedigree but some of the synonyms for it are; small-scale, diminutive, short and so on. Small-scale best suits Miniature Herefords but with two breeder groups allowing animals to be up to a frame score of 2 this creates confusion and misleading conceptions of what size these animals really are. A good example is when visitors see my Frame Score 2 registered miniature cow among the rest which, except for one Frame Score 1 animal are all Frame Score 0 or less. They ask why she is called “miniature”. With standard Herefords in a nearby paddock their question is not surprising. 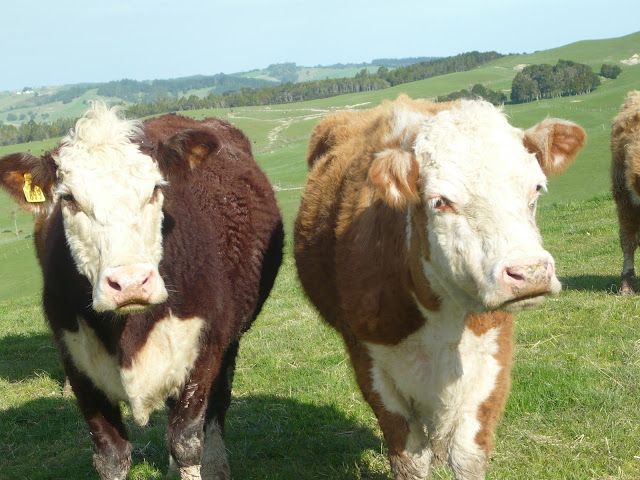 
In 2004 the New Zealand Hereford Association introduced a rule which does not allow the registration of progeny from a mixture of miniature and standard Herefords. I suspect one of the reasons was the bigger sizes being allowed for miniatures. Breeders of standard Herefords were concerned, and some still are, that these animals would end up in the sale yards being passed off as conventional Herefords with the purchaser finding later on that they did not grow to expectations. The fact that these animals are also being sold on to private buyers with no controls in place as to their backgrounds should be of equal concern. On the other hand some crossbreds (Hereford and another breed) which look like Herefords are also in the sale yards but that does not appear to generate the same concern. 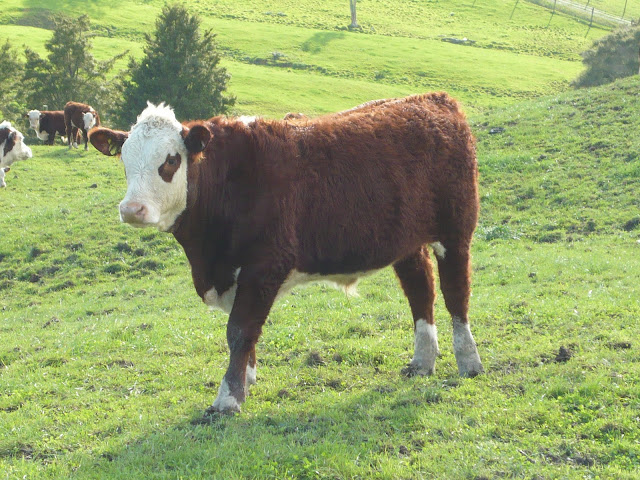 Three-quarter Hereford, quarter Friesian calf
There are three height categories used not only for Herefords but also for other cattle. Basically, anything below a Frame Score of 1 is classed as Miniature, from 1 to 3 is Classic and from 4 up is Standard or Regular. In the States, where Miniature Herefords originated and where they are far more prolific than in other countries, the upper level for a miniature can be FS 1 but the preferred height is from 0 down. Anything over FS 1 is NOT classed as miniature – it becomes Classic. This makes it very clear for purchasers as to what they are actually buying – pedigree does not come into it except for registration purposes as a full blood Hereford although the discerning buyer would do well to check any frame scores in the pedigree. 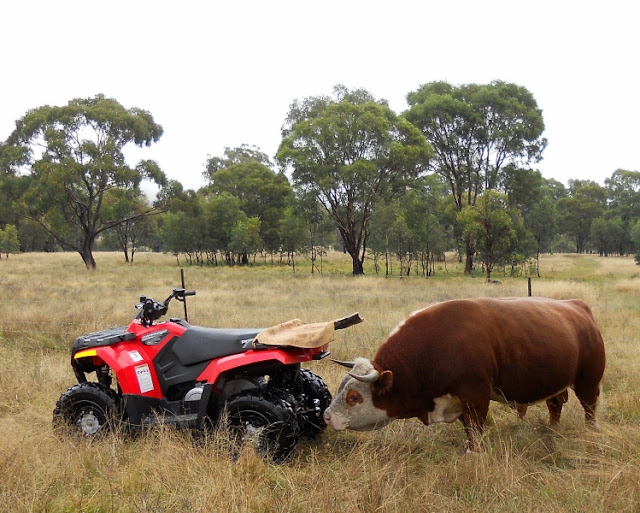 Seven-year-old Miniature Hereford bull
The argument for classifying FS 2 as miniature has been qualified by some as necessary because they need the larger size for their particular meat production purposes. This simply does not make sense. If you want a bigger animal then don't call it a Miniature – call it a Classic or Standard Hereford. If, however, you look closely at these larger “miniatures” you will see not too far back in their pedigrees, generally in the second or third generation, the Classic heights of F2 and F3. For those who have a fixation on Largent stock read this comment in an e-mail from Roy:
“It is very helpful for me when looking at an animal's pedigree to be able to see the frame score of each animal in that pedigree so that I can better predict the % of calves possible that would be larger than the parents from a certain mating.”
Frame Score is only a prediction, not a guarantee, of mature height of any progeny. In fact, according to some American research, frame score is more a predictor of future weights rather than a measure of body size. Check out this article on the website “Texas adapted genetic strategies for beef cattle X: Frame Score, Frame Size and Weight.”
Roy considers that miniatures are classified as cows being under 45” (114 cm) and bulls under 47” (119 cm) when they are three years of age. This means they are UNDER FS 1. Pedigrees should show either the concentration of smaller heights or the lack thereof - in other words HEIGHT is the important factor. The Official Frame Score Chart for the American Miniature Hereford Breeders Association allows mature bulls (3 years or older) to be up to 48" (121 cm) and mature cows (3 years or older) to be up to 45" (114cm).   This height is classed as Frame Score 1.

Roy also recommends developing our own lines of miniatures in the same way as being done in the States – that is, using a Miniature bull over small standard or classic Hereford cows and repeating the process with the progeny (with different bulls of course) until the miniature size is reached – depending on the heights of the animals used this can happen within two generations! Again NOTHING to do with pedigree but ALL to do with height and the added advantage of a wider gene pool. 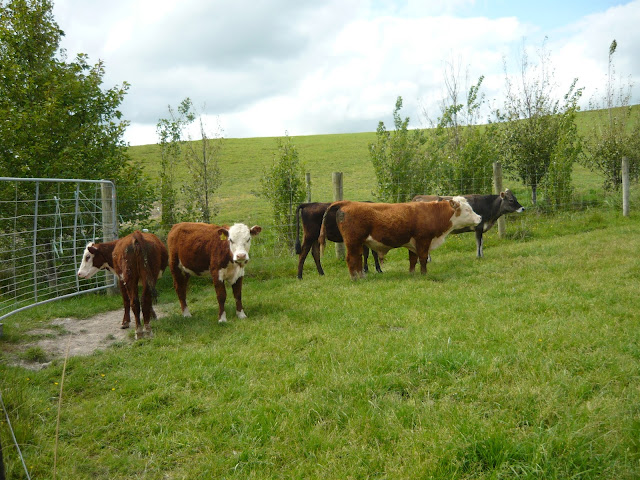 Miniature Hereford bull running with yearling Jersey, Jersey/Friesian and standard Hereford heifers
This downsizing is easily done in Australia and all other parts of the world where full blood Herefords, regardless of height, can be registered with that country's Hereford Association but currently not so in NZ. A safeguard can be put in place, however, by using only registered animals to begin with then having a separate register for the progeny which will record both the pedigrees and the frame scores. With the dearth of a range of new bloodlines and the incredibly involved process for importing new genetics this is the only way NZ is going to avoid going further down the track of line and in-breeding with their inherent problems.
An animal of two years is not really fully mature and may well have more growing to do. For this reason Miniature Herefords should not have an official measurement recorded at two. It is a useful interim indication of how tall the animal may be later in life but the official measurement should be at three years. A case in point is Patsy, who at two years of age had a frame score of 0 but was very close to being 00. She will probably not grow enough over the next year to stay at 0 so her three-year-old measurement is likely to be 00. 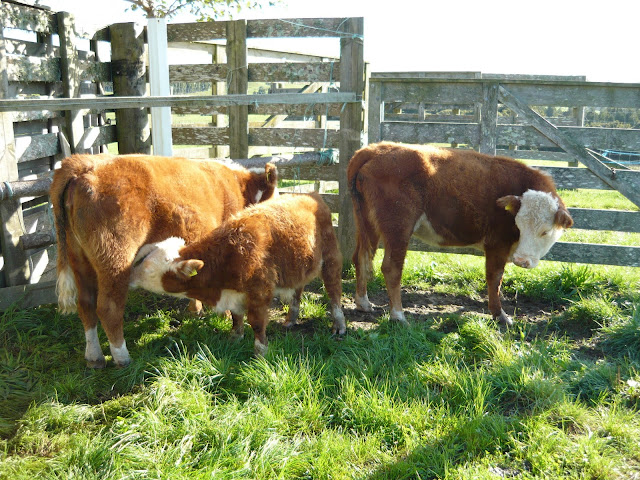 Stretching the frame score to allow for bigger animals is defeating the purpose of having “miniature” Herefords. The question also has to be asked – Why was the FS set at 2 and under by two breeders groups when it is so obviously at odds with the rest of the world. It makes a mockery of the hard work done by breeders in the USA to get the sizes down and they are quite puzzled by it. It also does nothing to help market the minis as truly small cattle which is what the majority of lifestylers are looking for.
Posted by Riverlets at 4:57 PM