WHY HAVE MINIATURE HEREFORDS? 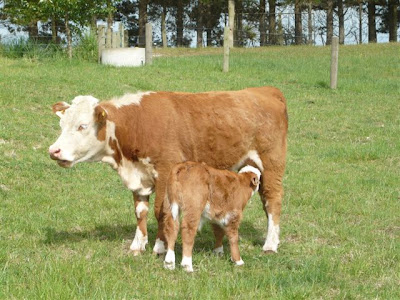 2-year-old Miniature Hereford heifer and calf
Miniature Herefords were developed by the Largent family in West Texas, USA starting in the 1970s.   Their reasoning was that the typical Hereford was getting too big, developing too much bone and becoming harder on pasture and facilities.   In order to “downsize” the Largents used the smallest Herefords they could find and continued to breed smaller over the decades until they reached the size now called “miniature”.   For this they are measured across the spine at the hip bones as the height there is less likely to change than at the wither.  In general bulls should be under 124cm and cows under 119 cm at three years of age to be considered miniature.  These smaller animals are not a separate breed.   They are descendants of the original Herefords brought to North America in 1831 and their pedigrees trace back along the same lines to those in the United Kingdom where the breed originated.   In conformation they should look exactly like the bigger cattle but proportionately smaller.
The characteristics of Herefords are that they are efficient foragers, mature early, calve easily, milk well for their calves and are excellent mothers.   They are extremely hardy and adapt well to almost any environment.   Their docile temperament and ease of handling makes them even more popular as a breed.   Miniature Herefords are all of the above but they have some added advantages.   They eat approximately 40% less food than their bigger cousins but produce 60% by weight of the prime cuts with less bone.   It is possible to graze two to three minis in the place of one larger animal yet get up to 25% more beef and at the same time have less damage to pasture and facilities. 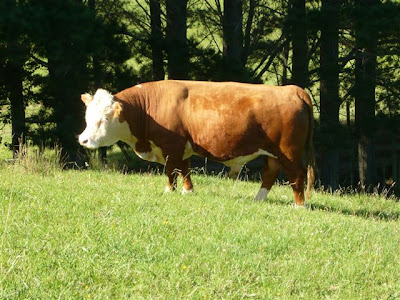 2-year-old Miniature Hereford bull
For those wanting to invest in Miniature Herefords it is wise to look at the size of your property before deciding on how many you want and whether or not you wish to run a bull as well.   Cost will also come into it as with so few Miniature Herefords in New Zealand they are not cheap.   It is probably best to start with just a couple of in-calf cows and add  a  weaner heifer calf or two if you have the room.   A ten acre block would hold those easily and give you scope for some expansion of the herd.
On a small block of land it would be better not to purchase a bull but to consider AI (artificial insemination) or leasing one for the short time needed to get your cows in calf again.   You would also need to look at selling stock either when calves are weaned or using heifers to replace older cows and selling the cows to avoid becoming overstocked depending on your acreage.   Remember that winter usually requires supplementary feed e.g. hay and drought conditions in summer could need it too.   Division of paddocks to enable rotational grazing is essential as set stocking can lead to problems such as a build up of worm burdens especially if you are not cross-grazing with other animals such as sheep.   This could also enable any surplus grass to be cut for silage or hay in late spring or during summer. 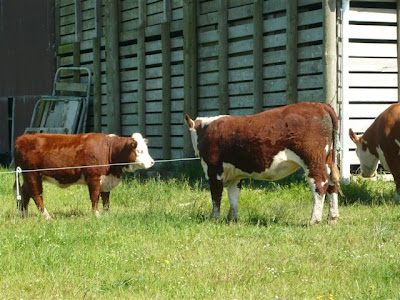 Yearling Hereford heifers - mini on the left, standard size on the right
If buying in-calf cows find out all you can about when they are due to calve and locate a good vet to be on stand-by especially if you have never had this experience before.   Calves will require vaccinations, there will also be dehorning and possibly castration of bull calves not needed for breeding.   If wanting animals for the freezer then sourcing a good Home Kill butcher is worthwhile.   If all this sounds daunting just remember there are plenty of experienced people around only too willing to help you. 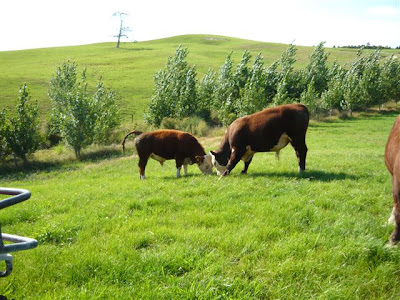 Yearling Hereford bulls - mini on left, standard size on the right
Should you decide to become a registered breeder there are procedures to go through for which you will be assisted.    Although you need to learn all you can about your cattle and how you would like to develop your breeding programme for matters like checking pedigrees in order to match your cows with specific bulls, what time of the year suits you best for calving, where and how you can sell or buy stock and so on there is always help available.    This can be through the NZ Miniature Hereford Breeders or other Breeders groups as well as working with vets, AI technicians, Livestock Agents and other personnel connected with cattle breeding.   You do not have to go it alone.
Posted by Riverlets at 9:34 AM