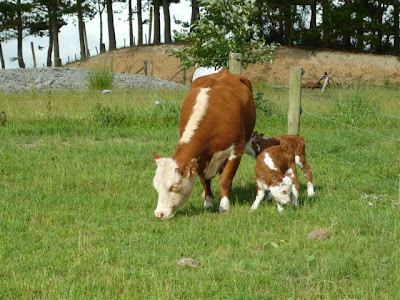 In 2011 a group of Miniature Hereford enthusiasts from Australia and New Zealand got together to set up a Virtual Cattle Show via the internet for Miniature Herefords. As only a few breeders in the Southern Hemisphere are exhibiting at shows we thought this would be a good way for others to showcase their animals as well as promote the breeding of Miniature Herefords. This is especially the case for those who live too far away from any show centres or have no means of getting to one. The show is designed to be fun with no entry fees but we are aiming to have Certificates for placegetters and possibly sponsors who can donate prizes for placegetters in their particular country.

Except for three classes animals must be registered as Herefords with HAL, NZHA, AHA or any other overseas equivalent and be of a Frame Score 1 or less in order to qualify for entry. For the breed classes if the animals are not halter trained then you will not be expected to try and groom them but they are preferred to be as clean as possible so it might pay to pick the times you photograph them. The Judges will be professional people with experience in judging cattle, photography and the requirements of the competition.

The first show in 2011 had a pleasing number of entrants and this was doubled in 2012. We hope to continue to build up each year and are happy to have feedback from interested people. Show Schedules can be seen on the following websites: www.amhbn.com, www.mhbaonline.org or
http://riverletsherefords.blogspot.com along with helpful hints for photography. Official entry forms are included and, if necessary, further enquiries can be made to me (Janet Poole) via riverlets@gmail.com .

To qualify for entry animals must conform to international standards which are:
Being a full blood Hereford (evidence of parentage).
Being of Frame Score 1 or under by the age of 3 years or over.

Rules:
The competition is meant to be fun.
The competition is limited to one entry per class per exhibitor but you can enter as many or as few classes as you wish.
The exhibitor must be the owner of the animal
To enter, complete an entry form and submit along with three photos of each exhibit, one front on, one side on and one from the rear (see sample attached).

Each animal entered in the breed classes (1 to 9) requires an identification as:
Class Number entered
Animal’s name
Registration or Identification Number(indicate country e.g. US, AU, NZ, etc.)
Date of Birth
Name of sire and dam
If a calf is a foot then the age of the calf when photo was taken
Exhibitor’s name, prefix, address and other contact details
For Breed Classes photos must have been taken over the current breeding season
No place ribbons, sashes, rosettes, etc., to be shown
No people in photos for Breed Classes
Photos must not be digitally enhanced
E-mail photos in jpg format of reasonable size but no greater than 150 dpi
Photo Number

Photos for Classes 10, 11 and 12 are open to all Miniature Hereford enthusiasts, must include such cattle and be taken by the entrant. Photos to have been taken during the past two years, except for Class 12, but not be one (photo) that has been entered in a previous VCS.


Classes available – 1 to 9 are judged by a registered Show Judge.

Class 1. Senior cow 3 years and over with own calf/calves at foot

Class 2. Junior cow 2 years with or without own calf/calves at foot

Class 5. Senior bull 3 years and over

Class 9. Group entry – to include males and females (do not have to be related)

Class 12. Favourite photo of a Miniature Hereford(s) – judged by a panel of the above Judges.

Choose the background so it doesn’t clash with the animal

Look at how the animal is standing, especially the placement of the legs. Front feet should be together and the hind leg furthest from you ahead of the nearer.

A straight topline is preferred

Keep people out of Breed Classes (1 to 9)

Experiment with the zoom lens and take several photos to obtain the best ones.

Examples of photos from the Breed Classes