Australia and New Zealand are separated by the Tasman Sea, affectionately known as "The Ditch" or "The Pond" although the countries are just over 1400 kms apart at the closest points.   Tasmania, a large island off the south-east corner of Australia is where Boomer Creek Farm is found.   It takes its name from the common reference to a male kangaroo as a "boomer" owing to a booming noise heard as it bounds across land at speeds of up to 70 kmph.   Joy and Colin Walters felt this to be an appropriate name for their farm which comprises 400 hectares on the East Coast of Tasmania with beautiful views over Great Oyster Bay leading out into the Tasman Sea.

Since the early 1970s the Walters have had standard sized polled Herefords then around 1994 their neighbour purchased some Lowline cattle of Angus derivation.   Colin and Joy loved the idea of having smaller sized cattle but being "red and white" breeders did some research and discovered Miniature Herefords.   Their first purchase was a recipient cow which produced Boomer Creek Atom and shortly afterwards they purchased a heifer, KT Real Roberta (imported from the USA).   This was the start of their Miniature Hereford herd.

Having always had polled Herefords it wasn't long before the Walters realised this would be a much better option than horned minis but it was a case of "do-it-yourself" as there were no polled minis outside of the States.   Starting in 1999 they followed the American system of using small standard polled Hereford females with a miniature bull.   After considerable searching they eventually found some with frame scores between 4 and 5 and later another one with a frame score of 2 - actually of Classic size.   So began the "breeding down" programme to produce polled Miniature Herefords.

For the first five years it was a very slow process with having to keep the size down as well as eliminating horns and also keeping the breed line different.   It meant using a horned mini bull across standard polls then using a different horned mini bull to establish another line then back across a standard poll to lose the horns.   This could have taken many more years except that in 2004 another Australian breeder imported polled Miniature Hereford embryos from Straitside Ranch in the States from which two heifers and one bull - all homozygous polled - were born.   Sired by SSR Micah (a small mini bull of the LS Mt Nugget 28 line) and out of SSR Miss Misty (an estimated "large" Frame Score 2 as the cows used by the Johnsons to start their breeding programme were in the frame score 1 to 2 range) the bull, Boomer Creek Felix, with a Frame Score of 1, really sped up the polled breeding programme.   With now over 40 progeny, all polled and of Frame Score 1 or less he has become the "foundation sire" of polled minis "Down Under". 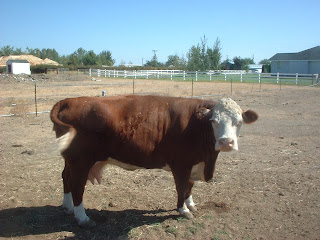 SSR Miss Misty - dam of Boomer Creek Felix, a polled
Hereford thought to be at the top end of Frame Score 2
which is not considered Miniature in the States. 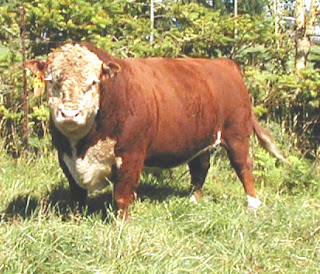 Boomer Creek Felix, aged six and winner of the Sire's
Progeny Class in 2010.   He has a Frame Score  of 1
and qualifies as a true Miniature as in the States, where
he originated, miniature means size not background.


Normally the Walters run around 50 breeding cows of which 95% would now be Miniature Herefords, mostly polled.   At least twenty of these are homozygous polled and most of them now have three, four and even five generations of Miniature Herefords on both sides of their parentage.   The demand for polled minis in Australia has really taken off as prospective owners/breeders see the big advantage in having no horns to deal with.   Half of the Boomer Creek herd was sold in the last financial year (including horned) with some animals going across Bass Strait to New South Wales and Victoria.   They could have sold more but ran out of available stock!

A big part of promoting Boomer Creek cattle is through showing and the Walters have been very successful even against standard Herefords and other breeds.   The animals are presented immaculately and well trained. 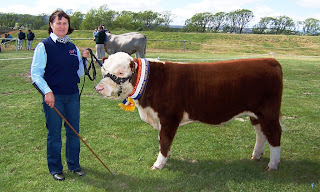 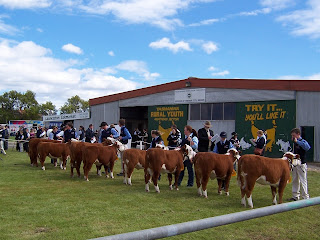 Seven of these polled Miniature Hereford heifers are
by Boomer Creek Felix. 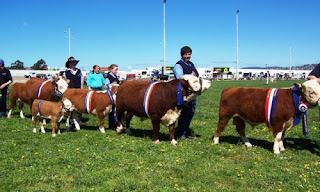 Good breeding and presentation deserves to win.
Some of Boomer Creek Felix' progeny.


It is thanks to the outlook and perseverance of such Miniature Hereford Studs in the States as Straitside Ranch (Betty and the late John Johnson) and Long Creek (Susan and Ron Himmelberg) plus Boomer Creek (Colin and Joy Walters in Australia) that polled Miniature Herefords have become available for Hereford breed enthusiasts looking for smaller cattle without horns.   For those of us following in their footsteps we can only build on the foundation they have laid - the hard work has already been done.
Posted by Riverlets at 11:27 AM