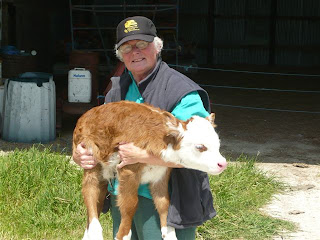 After going out to work for more than forty-five years last year I obtained my Gold Card and “retired”.   Not sure what that means!    Born and raised into a dairy farming family I later trained as a teacher, among other things, then gradually worked my way back into other aspects of the farming world which included beef cattle, sheep and deer along with a few other furry creatures.
My husband started breeding Herefords over forty years ago and when I met him had established a Stud of Polled Herefords under the name of Riverlands.    My Riverlets Miniature Hereford Stud is managed the same way as that of the bigger cattle.   From showing dairy cattle and horses I moved into the world of showing beef cattle and now run the cattle section of our local A & P Show.
I became fascinated with Miniature Herefords after researching them along with other little cattle and they have become my retirement venture.    I photograph them, write about them and have built up a great network of breeder friends around the world with whom I share information about the minis.   From this I now have specific ideas on how I want to develop my herd and the purposes for doing so.
As well as belonging to the New Zealand Hereford Association I am a member of the New Zealand Miniature Hereford Breeders Group, the Australian Miniature Hereford Breeders Network and the American Miniature Hereford Breeders Association.   I am Publicity Officer for the Northland Hereford Breeders Association and write articles about this group for the NZHA annual magazine as well as contribute to the “Red Rag” bi-monthly newsletter.   For the AMHBA I write articles from “Down Under” which include both New Zealand and Australia.   Currently I am organising a Virtual Cattle Show via the internet and being run by the AMHBN and details for this can be seen on this website.
Being able to organise my own time means my gardening interests get more attention and the occasional bit of horse-riding is possible – I really would like to do more of the latter.