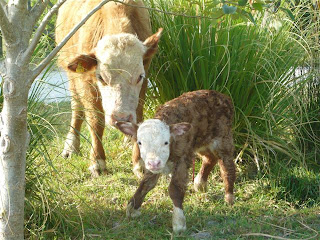 The Riverlets Miniature Hereford Stud started with the purchase of two in-calf cows and two heifers in October 2009.   It is run on the same property as our Riverlands Polled Hereford Stud but in separate areas.   The idea was to see whether the smaller cattle would be less destructive of pasture during the    extremely wet winters we experience here and so far this appears to be the case.   They are also better at handling drought conditions with one little cow feeding her twins right through the season.
In two years the Stud has grown to fourteen animals and will continue to build up to at least twenty breeding cows within the next few years.   If this works well then the number of breeding cows will be extended further.   The goal is to eventually have all polled miniatures in keeping with the bigger animals and being more commercially desirable.   Some imported polled semen has been used and more is being processed overseas to provide a range of genetics from which to develop the breeding programme.
The size of miniatures is recorded as Frame Score and universally a “true” miniature is of Frame Score 1 or less.    A mature cow should be no more than 119 cm and a bull 124 cm at the height across the spine by the hip joints.   My aim is to have my cattle under FS 1 with cows no more than 114 cm and bulls no more than 119 cm in height but on the other hand I don't want them to be too small.   Already, apart from two larger cows, my miniatures are FS 0 with one at FS 00.   Size can be heritable with the bull playing the major part so the selection of sires in particular is of importance for this.
I have found these little animals very easy to handle on my own and have several of them partly trained so far for showing.   School-age children will be taking them around the ring for me.   The regular handling pays off in such circumstances as recently when one of the heifers needed help with calving.   Her calf was coming back-to-front and upside-down but with the help of a couple of pieces of baling twine and the clear light of the moon I delivered the calf safely.   The mother had no concerns about having me around her or staying with her until the calf tried to get on its feet.
Trust is a great thing.