The move from using Hereford bulls over all dairy cows to bringing in Angus and Jersey to use with the heifers has thrown up some interesting observations.  This is because some Herefords are becoming too big for the servicing of dairy heifers with resulting calving difficulties.  Farmers still wanted a dairy/beef calf so turned to using Angus but once again there were calving difficulties with heifers.   The bull of choice then became the Jersey.   This is an advantage if the calves are heifers, especially Friesian/Jersey cross.   Often completely black in colour this dairy cross has been named the "Kiwi" cow and can be a successful addition to the dairy herd.   On the other hand a bull calf sired by a Jersey is a different proposition.   It is usually destined to be a "bobby" calf and has little value unless sold to a calf rearer who plans to on-sell it for use over dairy heifers.

The breeding of Hereford bulls for the dairy industry is our main "bread and butter" income.   The bulls are sold as two-year-olds to be used over mostly Friesian dairy cows which will then produce the white-faced calf so popular for the beef market.   Occasionally we have leased yearling Herefords for dairy heifers but lately have found they are being superseded by Jerseys with the comment that 'Herefords cause calving problems.'   This should be ringing alarm bells for all Hereford breeders.   The cattle in our herd tend to be slightly smaller on average than those found on most Hereford studs - we like to think of them as more "traditional" in type.   To date there have been no calving problems reported by any dairy farmers using our bulls but the concern remains where heifers are involved.

With all this in mind I began to think out a strategy which could benefit our dairy farmer clientele as well as us.   We normally transport the bulls ourselves so as we visited the different dairy farms I took along a folder of photographs of my Miniature Herefords and started talking.   My first question was, "What breed of bull are you using over your heifers?"   Every response was, "A Jersey."   Second question was "Do you think you get a reasonable return on the progeny of this cross?"   Answers were generally "No" unless heifers were being kept for the herd.   My third question was "Would you prefer a dairy/beef calf if there were no calving problems?"   Answers this time were in the affirmative so this is where I produced my folder of photos. 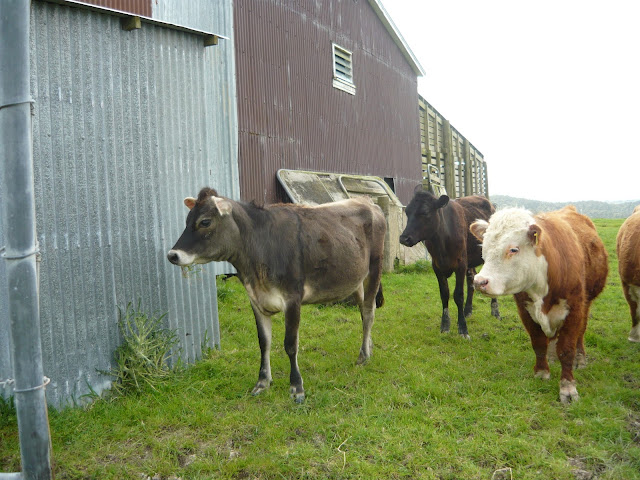 Reactions to the photos ranged from laughter to intrigue but not once were they ridiculed.   We then discussed the benefits of using a Miniature Hereford bull over dairy heifers including the fact that, especially with Friesians, the calves would be white-faced, just smaller but also chunkier and of greater value than a bobby calf.   There are now several dairy farmers considering leasing a mini bull next season to see whether they are a worthwhile option.   The bulls will, of course, be BVD (bovine viral diarrhoea) tested and vaccinated. 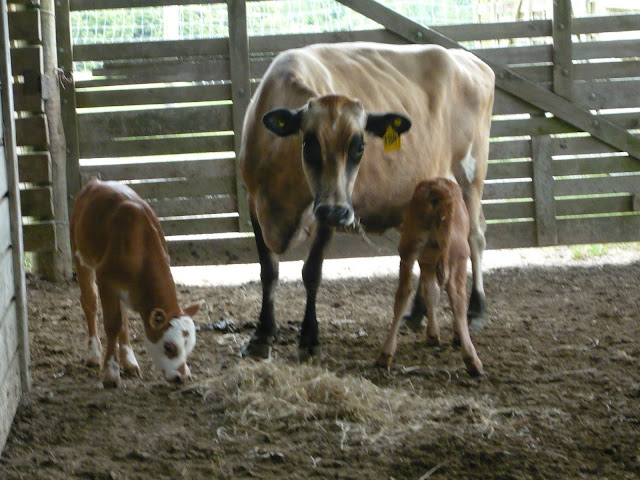 I did not, however, intend using these farmers as "guinea-pigs" so my idea was first carried out on my own small herd of dairy cows.   When weaned, the first dairy/beef calf from a mature Jersey cow was a solid, not-so-little steer which will be ready for the freezer at 18 months of age. 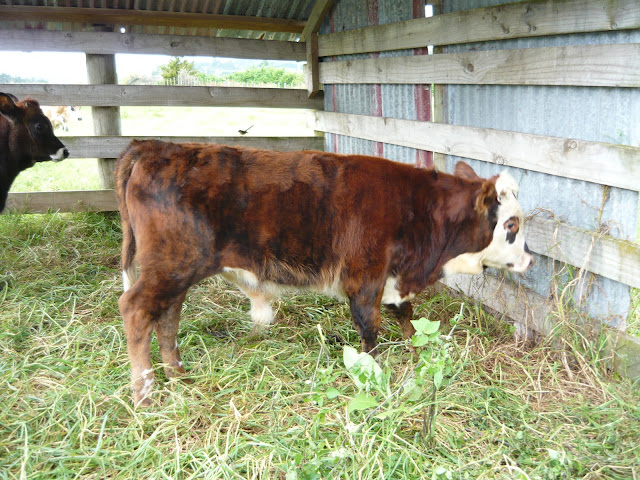 Two of my dairy heifers have calved this Spring to a mini bull.   Once is a full Jersey and she produced a bull calf weighing 29 kgs. 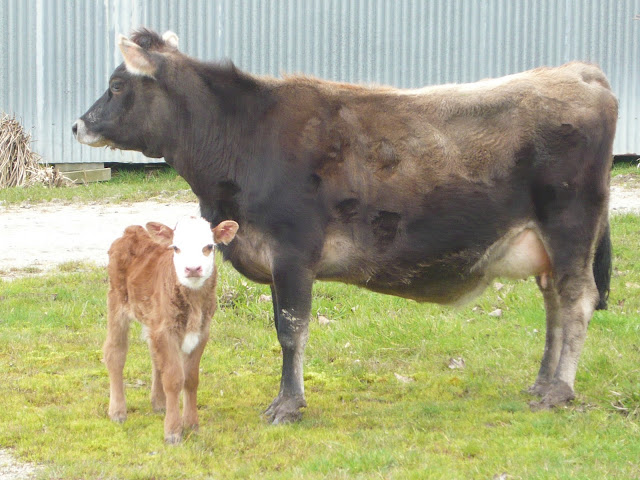 
The other is a Friesian/Jersey (Kiwi cow) and she produced a heifer calf weighing 31 kgs. 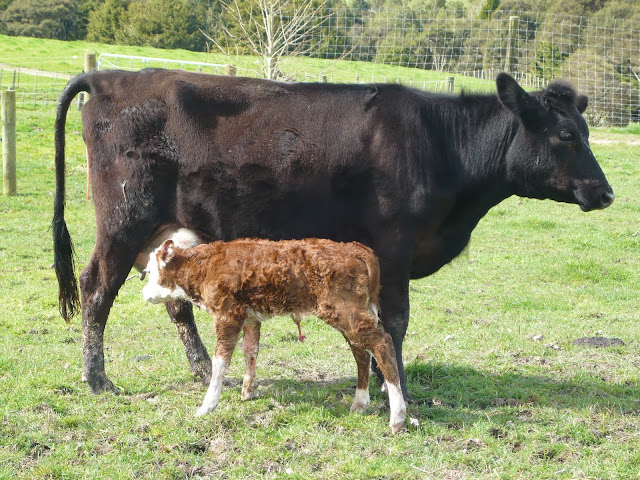 From first noting the heifers were a bit uneasy prior to calving to when the calf was born, washed, on its feet and feeding was within two hours!   This coming season I have an Ayshire/Jersey heifer which will run with a mini bull and a farmer with Friesians is considering leasing a mini bull for his heifers providing I take the calves once they are a week old as he does not wish to rear them.   That will open up another chapter in my strategic planning.