DEBUT OF THE MINIATURE HEREFORDS

Following weeks of training the Friday afternoon before the Show saw our four Miniature Herefords being washed and polished then turned out into a handy paddock for the night with instructions to STAY CLEAN. Hah! The next morning Grovenorth Patsy had liberally coated her calf with sloppy “whew”! 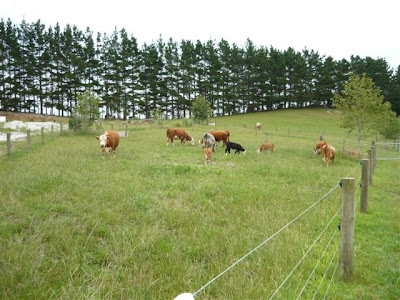 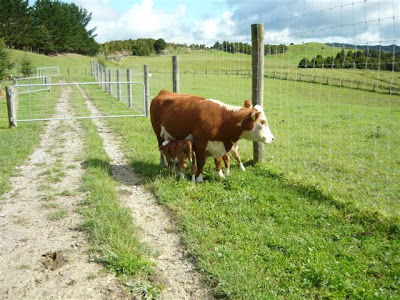 We are fortunate enough to have large covered yards in which we can make up big or small pens simply by shutting different gates. Another advantage is that we can make a race inside the perimeter of the yards which allows us to teach the animals to lead and walk properly regardless of the weather. Another long race leads from the yards past several small holding paddocks so once the animals are walking co-operatively we can take them outside. With everything going as it should we then go into one of these paddocks and use it as a simulated show ring. Here the animals learn to stop, stand correctly and move off when required to in the same clockwise direction they will go when exhibited. 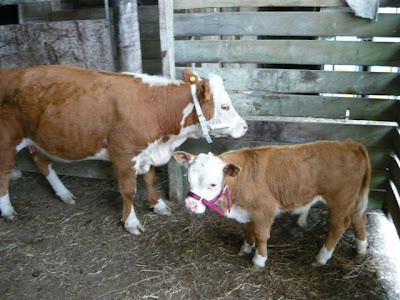 Training started with the new calf learning to wear a halter while the others were tethered and groomed. After a few days when they stood quietly we started going for little walks with the calf alongside his mum. The yearling was being willful and actually took more work than any of the others to bring her in line then later she had an unpleasant surprise for us. A radio was turned on with the sound reasonably loud and friends were permitted to come and watch during the latter part of the training. Some of them also patted and brushed the animals helping accustom them to a “public” situation. 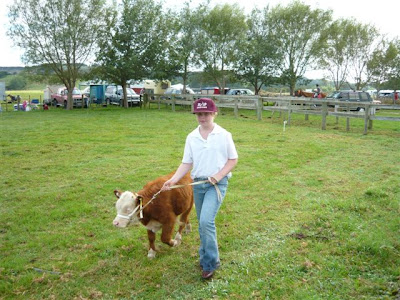 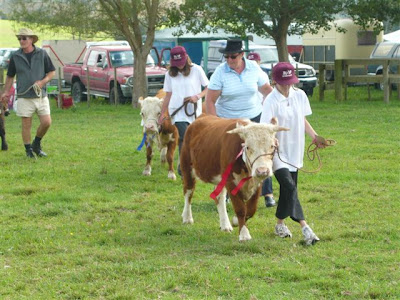 This was a real opportunity to involve young people with the minis. Riverlets Patrick (Paddy), the calf, became the responsibility of 9-year-old Jessica. She did such a good job with him that when my great-niece, who was nearly 9, visited from the city she was able to brush and walk the little guy herself with no problems. Later on the 2-year-old heifers, Mount Marua Emma and Grovenorth Patsy were taken over by 13-year-old Inaya and 14-year-old Brianna respectively. These girls were exceptional in the way they prepared the minis for the show ring and they achieved many placings. This was even more rewarding in that we were competing against the popular Highland and Dexter cattle and at a later show, Red Poll.

At the showgrounds Riverlets Sparkler, the yearling, put on a real performance. Coming off the truck she took fright at the surroundings, panicked and nearly pulled my husband over the ramp with her. He had to let go and she bolted through some vintage vehicles and headed toward the rodeo venue. The “cowboys” saw a good chance to put their skills into action so rounded her up and secured her in the yards. With the comforting presence of a friend's big Saler cow Sparkler was brought back to the show pens and tethered. We let her settle down and eventually she went into the show ring and behaved as she should. At he next show she won her class!

The only other disturbance was when Patsy, missing her calf who was doing his thing in the ring, leaped over into another pen looking for him. If I'd known she was such a good jumper I would have entered her in the equine events! Thankfully the “victim” graciously accepted my apologies. 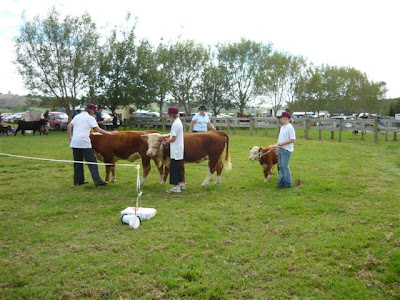 The ups and downs of the day did nothing to deter the enthusiasm of the “team” who are eager to continue showing. The minis attracted a lot of attention from the public and other young people have asked if they can be involved too. Next year we could have quite a collection to take out and about and with fourteen shows in the Northern Districts area we can pick and choose which ones to go to. Great advertising for the Miniature Herefords.
Posted by Riverlets at 11:13 AM